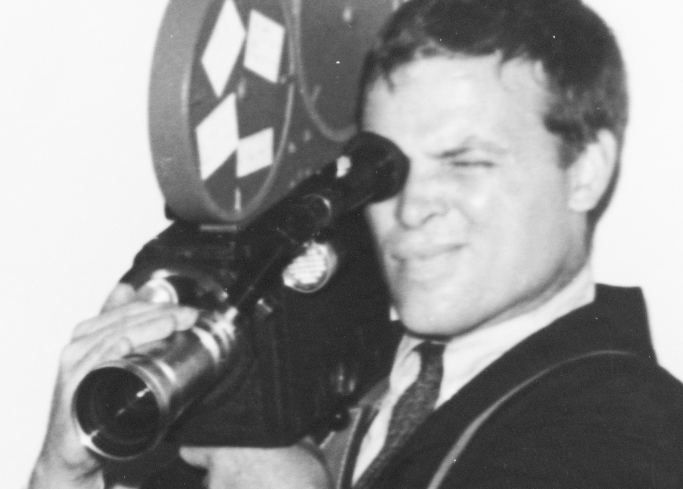 D.A. Pennebaker was invited by Richard Leacock to join he and Robert Drew in an experimental unit of Time-Life Broadcast in the late 1950s, a unit that became Drew Associates in 1960. Pennebaker and Leacock shared office space and talked often about trying to make films in a new way: more real and less stilted. Pennebaker, trained as an engineer, was a genius at figuring out how to make balky, bloated equipment work for the purposes of making shooting more portable, so the camera and sound recorder could follow a character moving through a story.

Pennebaker played a crucial role in the making of the film, “Primary.” He oversaw the installation of novel rig that, for the first time, would allow 16mm film to be shot and edited in sync. The editing equipment, Robert Drew often recalled, was so voluminous it required a ballroom-sized room to hold it all. “Don’t worry, Bob,” Drew recalled Pennebaker telling him as he started to open the door to the editing space for the first time. “I’ve wired all the fuses,” so they wouldn’t blow.

Pennebaker also outfitted a film camera with a new, ultra-wide lens, which he handed to Albert Maysles, who held it above his head as he followed John F. Kennedy into a campaign rally, creating one of the most memorable shots in documentary film.

Pennebaker’s talents as a young filmmaker went far beyond the technical. In films like “David” and “Jane,” Pennebaker’s long camera holds and penetrating closeups created a deep, psychological bond with the films’ characters. That distinctive style is part of the art in “Crisis: Behind a Presidential Commitment.” Pennebaker, along with Greg Shuker who produced the film and took sound, are the only two independent filmmakers to ever shoot inside the Oval Office witnessing a President making real decisions.

Pennebaker left Drew Associates in 1963 and formed his own company with his one-time mentor, Richard Leacock. The recipient of a Lifetime Achievement Academy Award, Pennebaker went on to make such landmark documentaries as Dont Look Back, and along with his filmmaking and life partner Chris Hegedus, The War Room.

Pennebaker and Hegedus continued to make powerful films until the end of his life, the last being “Unlocking the Cage,” which debuted at Sundance in 2016. Pennebaker’s company is Pennebaker Hegedus Films, which he ran with Hegedus and his son, Frazer Pennebaker. Pennebaker passed away on August 1, 2019, at age 94.