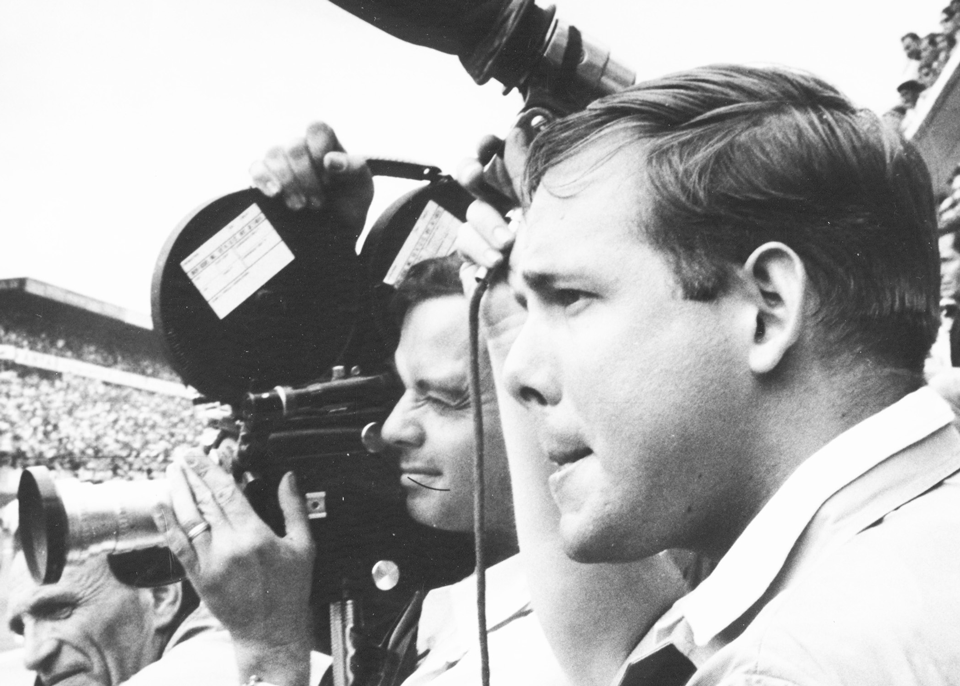 Gregory Shuker was a Life Magazine correspondent in the summer of 1960, working in the magazine’s news department, when he got a phone call from Life photographer Howard Sochurek. As Shuker recounted in P.J. O’Connell’s Robert Drew and the Development of Cinema Verite in America, the rest of the story goes like this:

“[Sochurek] said he was upstairs and he was looking at something that might be interesting to me, if I had a few minutes to look at it…” Shuker went to a room on the 34th floor of the Time-Life Building and watched a black-and-white film running on a tiny Moviola screen, playing a rough cut of the Drew Associates’ film, “On The Pole,” about Indy 500 race car driver Eddie Sachs. Shuker joined the crowd of people clustered around the screen — Robert Drew, D.A. Pennebaker, Albert Maysles, among others — and watched as Eddie wandered the track after losing the race, the camera following him as crowds ignored Sachs and swarmed around the race’s winner.

“And the camera was right with him. And, I mean, he was kind of turning around, 360-degrees, and he was waving, and he was trying to get people’s attention — nobody was paying any attention to him! And there was this incredible sense of being there. I’d never seen anything like that,” Shuker recalled. “And Bob looked at me and said, ‘Well, what did you think of it?’… I said, ‘I don’t know what that was that I was looking at, but whatever that was, I want to do that!’ That was the beginning. Right there.”

Shuker’s sharp journalism skills guided Drew Associates to important, news-worthy situations with compelling characters to follow. He quickly became part of the small core of filmmakers at the heart of Drew Associates. Shuker operated primarily as a producer-correspondent, which meant that he scouted out stories and recommended them to Drew. Once Drew assigned a story, Shuker was the on-the-ground producer who made it all come together. He often took sound as part of a two-person camera/audio crew.

Drew once wrote about how he came to assign the film, “The Chair,” which Shuker produced in 1962.

“Drew Associates contracts with Time Inc. to produce eight programs,” Drew wrote. “I have five Drew Associates correspondents out looking for stories. I receive a call from Greg Shuker. ‘Bob, I am in a phone booth in Chicago. We have a story here I think you may want to assign.’ Convicted murderer Paul Crump is due to die in Chicago’s electric chair within the week. He considers the warden, Jack Johnson, his best friend. He has asked Johnson to be the one who pulls the switch for the electrocution. Johnson has agreed.”

In addition to “The Chair,” Shuker also produced another important and prize-winning early Drew Associates’ film — “Crisis: Behind a Presidential Commitment.” The camera goes inside the White House, the Justice Dept. and the Alabama Governor’s mansion during the forced integration of the University of Alabama in 1963.

Shuker could be fearless in his pursuit of a good story. He and photographer Abbot Mills flew more than 50 combat helicopter missions to produce “Letters from Vietnam” for Drew Associates in 1965.

Shuker continued to make films with Drew for more than two decades, even after Shuker had moved on to form his own company. Indeed, in 1990, Shuker joined a caravan of adventurers who were driving from London to Beijing, re-tracing an early route used by explorers for the Drew film, “London to Peking: The Great Motoring Challenge.”

Shuker won an Emmy and a First Prize at the Venice Film Festival for a film he independently produced for Public Broadcast Laboratory, a forerunner of PBS, called “Free At Last,” which chronicled Martin Luther King, Jr.’s 1968 March on Washington and also captured the civil rights icon’s last days.