River of Hawks uses unique filming techniques to record hawks during their annual migration over the isthmus of Panama, where tens of thousands of raptors bunch together to fly over the little sliver of land to avoid the more taxing over-sea route. Filmed for National Geographic Explorer, the story combines two of Bob Drew’s passions: birds and flying airplanes.

Just as there were no cameras to shoot the kind of cinema verite stories he wanted to make in the early ’60s, there were no airplanes that could get up-close details on hawks’ flying habits, which he needed to tell the story of biologist Neal Smith, who studied the raptors from the Smithsonian Tropical Research Center in Panama. Helicopters were too noisy and scared the birds; airplanes flew too fast. Gliders had tight canopies and large wings that obscured the views. So, just as he did in 1960, when he managed the development of handheld sync-sound cameras to capture real-life stories in real time, Drew built a kit airplane without a canopy so he could fly in mid-air formation with the hawks. 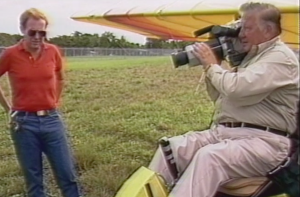 “There’s not a lot of protection if I were to run into a hawk or even have an argument with one,” Drew says in the film, describing his plane, called the “Drifter.” 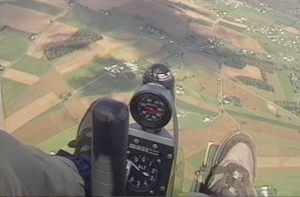 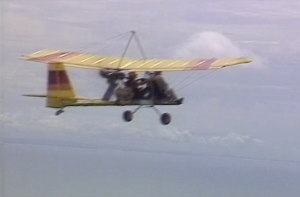 The plane becomes part of the story, as it floats in the sky along with the hawks, twirling up in thermal lifts and riding the powerful air currents that precede a thunderstorm. Drew did get the photos he was hoping for. 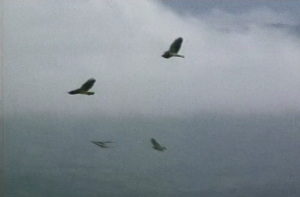 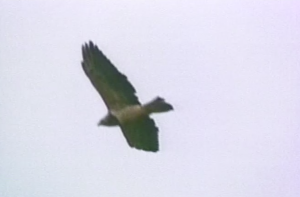 The film is only 15 minutes in length, and it has a dreamy quality. To get that story, though, was anything but dreamy. First, there was the need to build an unobtrusive airplane (this one is so slight, you start its engine by pulling on a cord, like a lawnmower). 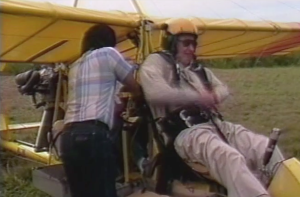 Then, as Drew landed after soaring in the clouds with the hawks, he and his wife and filmmaking partner, Anne Drew, were surrounded by soldiers of dictator Manual Noreiga and arrested for spying. Apparently the hawks had been circling over a secret military establishment. During their interrogation, Drew told the soldiers that he had no idea about the installation and encouraged them to watch all the footage he had shot to prove that he was filming birds, not military hardware. After several hours of watching tape after tape of feathered creatures, the soldiers let them go.

Drew tells a humorous story about his camerawork on the film, which photographer Chris Buck posted on a blog, “Popped.” The story starts when Buck asked Drew why he wore suspenders.

Drew responded: “I’ll tell you what the defining moment was for me. I was in Panama to shoot a video tape film, “River of Hawks,” for National Geographic. Hawks aren’t that friendly to each other and you rarely see them in formation flying, so this was quite a spectacle. I’d been planning for months and down there for weeks hoping this would happen. I was the camera person, Anne was shooting sound and were were at the Tropical Research Station of the Smithsonian Institution. The guy we were with said, ‘they’re going to come right over that hill’ and suddenly, right over that hill came what looked like WWII bombers, endless streams of them. I was so thrilled and exicited. I was shooting a big heavy Betacam camera and I tilted it up, arched my back, and pressed the button. I began getting the great picture that I thought I’d never get, it might only last a minute or two, and my pants fell down. Why did my pants fall down? Because I was wearing a belt. So, my wife would say, ‘Bob, stop, you’ve got to pull up your pants,’ and I was saying, ‘get away, be quiet;’ I wasn’t going to stop for anything in the world.”

Buck asked: “Did you get the shot?”

Drew: “I shot for about five straight minutes with my pants down around my ankles surrounded by scientists who I hoped were looking at the birds. Anne was right, it was a terrible sight.”